Johan Th. Pronk was born on April 16, 1963, in Nieuwkoop, the Netherlands.
After working as an officer on merchant ships and at the Royal Dutch Navy, he worked as a manager for various (international) ICT companies.  During that time, he lived for three years with his wife and five children in Israel.
He studied theology at the University of Utrecht and the Protestant Theological University. During the last two years of his studies, he worked as a pastoral worker in various Dutch Reformed congregations.  After completing his theological studies in 2011, he was called as minister of the Dutch Reformed Congregation of Sirjansland. 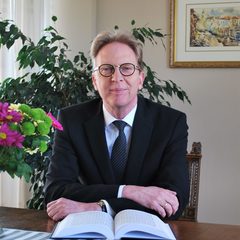